Okonomiyaki: Rich in History and Flavour

When I lived in Japan I was surrounded by incredible food. Sometimes exciting. Sometimes terrifying. From jellyfish and raw horsemeat to gyoza dumplings. I thought ‘there’s no way I’ll get used to that’.

But here I am, reminiscing about foods that I would love to eat here and now. I used to travel and visit friends all across Japan. There was one dish that I fell in love with: Okonomiyaki.

Okonomiyaki will always hold a place in my heart. It’s here that I’m going to introduce it to you, and show you how to make it yourself!

Okonomiyaki is the soul food of Japan. Literally translated to ‘cooked/grilled how you like it’ this is a dish based on a pancake / batter style mix with fresh vegetables and comes in 3 main forms:

I’m an Osaka style girl (mainly because it’s the easiest to replicate at home) but all 3 are great in their own way!

The history of Okonomiyaki is just as rich as the food itself.

The wheat-based pancake mixture used in Japan can be traced all the way back to the Edo period (1683- 1868). However, the word ‘Okonomiyaki’ itself only started to appear in the 1930s in Japan.

During World War II the scarcity of ingredients meant the popularisation of foods like Okonomiyaki  became an increasing favourite. This is because they were cheap to make with simple ingredients.

Now, it doesn’t matter where you go in Japan. You can easily find a place to get Okonomiyaki.

One of the most (if not the most important ingredient) in Okonomiyaki is Okonomiyaki sauce (お好み焼きソース). You can easily buy this online or at a local foreign supermarket.

Luckily, with further globalisation and large online food supermarkets like Japan Centre and Oriental Mart that dream can become a reality.

But if you wanna learn how to be a boss and make it yourself, click here for the recipe.

So let’s delve deep into the world of the styles of oOkonomiyaki and how to make them!

What's On This Page? 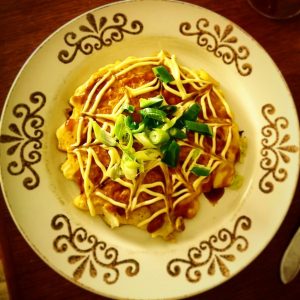 This style of Okonomiyaki is where cabbage really comes into its own. It’s super easy to make at home – and I couldn’t recommend it enough! It’s perfect for sharing with others or as dinner for one.

So what is Osaka style?

Osaka is a city in Japan in the Kansai region – therefore Osaka style okonomiyaki holds its heritage from this area.

The basic ingredients are flour, water/dashi (Japanese stock), cabbage and eggs. However, this is often spiced up with meat, fish and additional vegetables to make it more hearty and savoury.

The most defining factor of Osaka Okonomiyaki is that the ingredients are normally mixed together into one large batter which is fried all at once.

It’s often topped with Japanese mayonaise and Okonomiyaki Sauce (which you can find at your local foreign supermarket or online).

For our simple and tasty recipe for Osaka Oknomiyaki click here. 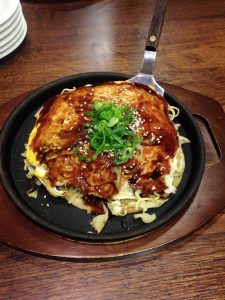 Ah Hiroshima style. A beautiful seperation of all the ingredients, layered on top of one another.

Hiroshima, as we’ve explained, is seen as the birthplace of Okonomiyaki’s increasing popularity in the 20th century.

This version is typically less batter-heavy (with a thin layer) and more focused on the other components. It often has yakisoba noodles, egg, cabbage, bean sprouts and much more forming its layers.

Whilst it isn’t quite as easy to make as Osaka style, the combination of rich flavours makes it a real treat! And here at PoorHungryStudent we will rise to any challenge!

When you first see Monjayaki cooking you notice a stark difference: the amount of liquid.

Monkyayaki owes its name to the Kanto region and is particularly famous in the Tsukishima district (月島), located in Tokyo Bay.

The biggest difference is how Monjayaki is cooked. The ingredients are very similar to Osaka and Hiroshima style but it has less flour.

With a much more tempermental texture you have to fry the vegetables and form them into a circle. In the middle of the circle you add the liquid batter and once it’s cooked enough for it to thicken, you add it to the rest of the vegetables.

It works as a dish for sharing, each parts scooping a little on to their plates (in Japan they often use little spatulas)!.

There’s so many different toppings to make Okonomiyaki your own.

Here are some classic toppings:

So what is the difference between ‘normal’ mayo and ‘Japanese’ mayo?

Japanese mayo is typically made with only the egg yolks, instead of the whole egg (as you find in normal mayo.

It also has more of a ‘tangy’ flavour. This is because typically it has more acid, like vinegar, added.

All of this means that Japanese mayo is richer and more creamy than standard mayo.

If you want to learn how to make the sauce yourself click here.

As we mentioned, this often found in foreign supermarkets or online.

But what exactly is Okonomiyaki Sauce?

Well it has that ‘umami’ punch to it. It’s sweet, salty and savoury.

The three main ingredients to the sauce are ketchup, Worcestershire sauce, oyster sauce and sugar (or honey).

Want to learn how to make it yourself? Click here.

This is often used as a garnish to add a freshness to the dish and colour!

I hope this has inspired you try making Okonomiyaki yourself! It’s cheap, tasty and super easy as an introduction into authentic Japanese cooking. If you want to check out more Japanese food, click here!

Have you ever wondered how to make perfect Sushi Rice? We’ve got your covered, click here!

Here at PoorHungryStudent we want to embrace every culture and cuisine. If you want to try a diverse range of recipes go to our recipe homepage.